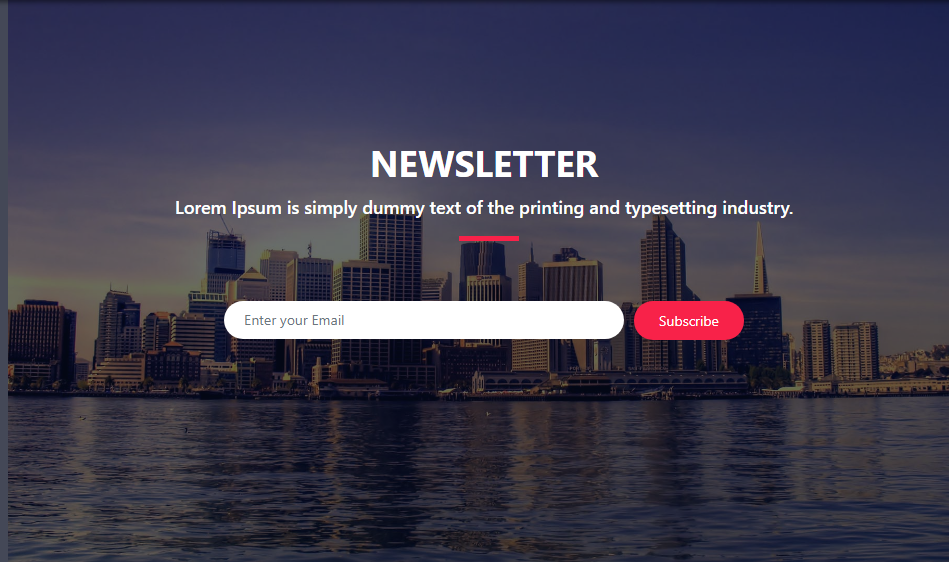 Email marketing is one of the trends for digital marketing. Not only its a simple method but also efficient. Research says that for every dollar spent on email marketing the return of investment is about seven dollars. Where else will you find profit to this extent? However we are not here to discuss on email marketing rather just a basic component relevant to it. This basic component is the beginning phase. That is collecting the email address of users. It is necessary to have a beautiful mailchimp subscribe form and appealing subscribe button using html and css to get the job done. Moreover, the newsletter css subscription form shouldn’t be irritating your users. Make sure to place them in a right place striking them in a right way.

Its pretty much clear that no one will just come and provide you their email address like that unless you have an amazing content collection. With so much of mails going to spam people don’t prefer giving away their email in order to avoid all those stuffs. So making sure that their email isn’t getting into wrong hands is something you need to deliver with your subscription form design. Design your subscribe or sign up form in a professional layout with appropriate messages included and don’t over complicate things by asking them to fill the form every second. This will just chase them away. Give them the option to subscribe any time anywhere by making the form easily available somewhere. A simple location can be the header area with your contents below.

So in this article we have brought you the collection of 17 beautiful subscription forms along with source code. Not only they are amazing in terms of layout but also in terms of functionality, size and a number of other optimization. Whether your website is going to launch soon or if you already have a good collection of contents already, with these subscribe forms you’ll never miss a new user again.

Here’s the list of mailchimp subscribe form with html, css and some javascript to lure your visitors for your newsletter service.

Filling up form is a tedious task. You have to go through a number of details that may never be used again. So let’s just ask what’s required from the users and get things going. In case of newsletter subscription form its just the email that’s necessary. So, include a simple input field for users to enter their email and an attractive subscribe button with css. You can pay extra attention on background and hover effects if you want more. However a simple newsletter subscription form in terms of css code looks premium and effective from user point of view.

You don’t have to dedicate an entire page for subscription form of newsletter or anything else. The example below shows how a simple box that ma reside as a normal side bar component can get the job done. As we just require an input field for users email with few additional effort to convince users for subscribing, this layout is perfect for space management. The subscribe form makes little use of html and css to get icon and layout that is optimized in a number of ways.

Mailchimp subscribe form should be appealing because why would anyone offer their email address that doesn’t look professional. With so many mails going to spams people won’t just give away their email address if you’re not clear how the users are actually benefiting from it. For that the following mailchimp subscribe form provides just attractive clip art, space for to write what you’re offering and an appealing css subscribe button. However, the subscribe button is not just a text but a suitable icon.

The following piece of subscription form css layout can even be used for login layout with just few modification. It comes with data validation so don’t waste you time trying to fill an empty form as the mailchimp subscription form detects it. Therefore, it displays a warning to fill the details. Not just empty field but a correct mail format is necessary to proceed forward as assurance that correct email address is set. Talking about layout its just a white box with transparent css labels and gradient subscribe button.

It will just require few lines of html and css code to get this subscribe form. Its pretty much similar to examples that we have seen. A header content for your organization or sign up label followed by some subtitle of what users will get and finally the input field. In this css subscription form input field and subscribe button are attached to make it look as a single component. It will just take less than half of the screen size to get users for your mail subscription.

This one looks so premium layout for sign up used in a number of applications. Depending upon the type of subscription that users pick you may need to offer slightly different css form. For example a free account may not require payment option but a premium account may require. However, you can’t display all types of form at once so let’s render a form as per users interaction with toggle button. This is not the only feature that attracts users but the benefits being conveyed within the form while maintaining app theme is a trick to consider.

The newsletter subscription we have here is like a simple header which you can include on every contents you have to offer. With this layout the form does the job of marketing as well increasing your user base. The subscribe form is a combination of input field and subscribe button acting as single css component. It doesn’t do anything fancy or tries to complicate the things. Its just straight to the point with simple layout. Let your contents do the talking and this as an option for them to get more on those.

The following example of html and css subscription form tells us that we don’t have to dedicate more than space of a button for a great subscribe form. This is because initially we just have a button for interested users. Click on that button and an attractive mailchimp subscribe form pops up. You can add as much animation as you want or give additional effort since it only renders for interested users. Half work is already done knowing they are interested and you d the rest by offering a newsletter subscription form that they can’t resist.

A simple subscribe form that focuses on light colors. So, if you are using light theme for a peaceful vibes for your users then you can consider having this css subscription form. Like all form should be it also comes with a validation rule. So, no submitting of empty field or incorrect format data. You can also add a promise that no spam mails will be sent so that you can win additional trust from the users.

This example is a 3D layout of the mailchimp subscribe form. Considering there’s a cancel button, you can present this as a suggestion pop up to subscribe to you newsletter. It contains of multiple layers in which one contains cancel button and another input for email. These layers are connected by a ribbon that also serves as a css subscribe button. So if you gave so much effort on a great html subscribe form then what you may have planned for the users. This might be the thought running on your potential users after this layout of mailchimp subscribe form.

Here we have a simple css box layout asking for email and a sign up subscribe button below. The layout is not focused on any particular theme with just gradient color background. To know more on what gradient color does for your website make sure to check our article on gradient buttons. So having said that the theme is not based on any particular subject it can be implemented as universal scope. So ever in confusion you can go for the following css subscription form.

So even if you build a great layout for newsletter subscription form that will lure the visitors there might still be a tiny issue. How will you verify that they have been successfully subscribed? Getting a mail is the final step of the process but user needs to be sure that they have atleast submitted their email. This css subscription form offers the solution by hiding the input field. By hiding I don’t mean it simply sets the visibility off but a thanks message overlaps the field. A good gesture to start with for your users.

Some applications, websites or stuffs make buzz even before being officially launched in the market. People want be first one to get any information on that and to serve the same purpose we have a css subscription form as below. Along with the promise to notify users through email the layout looks appealing enough to create another buzz among people. Even if you’re website not completely designed you can use such layout as the home page till the time being. It assures to some level that users are not missed.

I think we went a bit too long with involving css animation in subscription form. So we have a simple animation for html subscribe form with css. Its not anything too fancy that we have seen in a number of previous articles however its definitely informative. We just discussed on importance to notify on users their submission is successful and this is the way to do so. After hitting the subscribe button the css effect involves sliding in a message on top of input field. You guessed it right its the confirmation message with thank you note.

The following css newsletter subscription form demands only a small portion of your top screen. It is because its like a header component on top of a number of other contents. If its a part of marketing campaign appearing without of context you can include the collapse option. This considers the user experience of both interested and non interested users. For interested users they have simple access to the subscription form while other users can simply cancel and move along.

In the last example of css subscription form for newsletter I will again say that you don’t have to present a full layout every time for users to see. They can choose to fill the form if you have impressed them enough. However, this doesn’t mean you should hide the form in some corner of the page. Just hide it under a button and make the button available within the reach of users. A website contains so many buttons and relevant components so its not going to be any issue to include another one button. This makes the space utilization efficient. In addition website doesn’t have to render the subscribe form every time.

We brought you today’s collection of subscription form design because it is equally important as rest of the web components. They play vital role in capturing the users in collaboration with other web elements. Ultimately you are paving the path for your business’s success while designing the subscription form. Hence with all these examples we hope you were able to pick one for you. However we feel that its not one you picked but combined a number of examples to get one amazing piece of subscription form. Go ahead and tell us in the comments below what did you come up with.