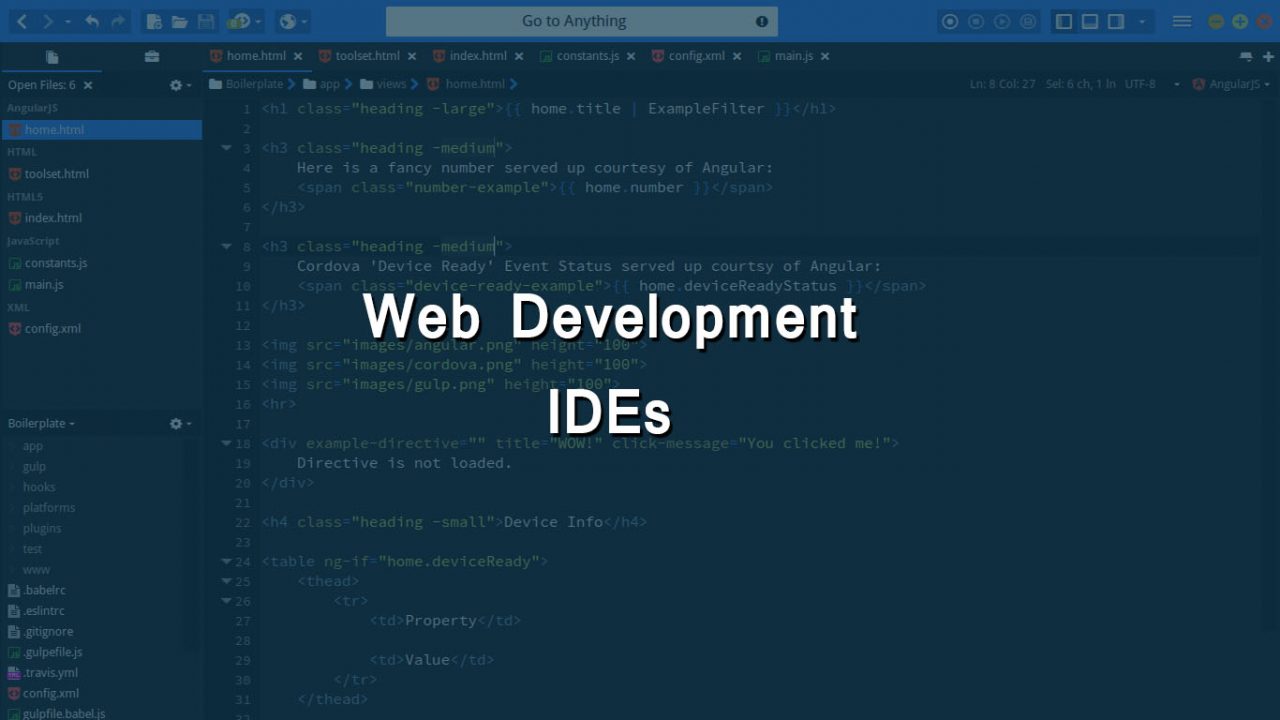 Whether you are an old computer professor or a just a beginners in field of design, coding is not a thing you prefer to write all by yourself. Of Course, it’s complicated, in the first place, long, time consuming and even a smallest mistake can get a huge problem. So you always look for some ready made codes including some code editor, compiler and interpreter. This is exactly what IDE or integrated development environment is all about. Is consists of source code editor, automation building tool and a compiler. Additionally, for a web developer, it is must to approach some web development IDEs for the best results.

In the light to history the concept of IDE was firstly used in 1995. But it only got lot familiar in last decade as the simplification of coding became the target of developers. Betterment of an IDE depends on components it includes. While source code editor Compiler, and interpreter are the basics, class and object browsers, class hierarchy diagram and other tool for object oriented development are additional things.

The more you know the better you choose.Lets have a look over the list below will aware you of the web development IDEs you should choose for yourself.

This sophisticated text editor is a customizable package. Its automatic operation and multiple selection feature sis quite preferred by the peoples. It even uses multiple syntax and shortcuts for smooth functioning. Project switch, cross platform and split editing is some of its additional features. It demands the purchases of premium package for providing complete package.
Download Page

This, uniquely has support for the largest number of language i.e. JavaScript, C++, visual F# and many more. Visual Studio works in web application and android phones as well including 300 browsers. It has customizable dashboard and dockable windows. It also has automation tools and easy refactoring and many more. But this number of function make it heavyweighted and quite expensive as well.
More Detail

If the MS visual studio is not your choice, komando may be because it is free and light weighted and it can be seen as latest integration for stay in-the-zoom features. The greater version of komodo edit is komodo IDE which is a paid version. Likewise, it has debugging, unit testing, code refactoring, code profiling, plus integrations including some control systems.
More Details

RJ is the powerful wave for PHP, ASP, JS, HTML and CSS. It allows extension, integration, spelling checking, auto correction, validity and many more. It also has properties like highlighting CSS/ LESS/ SASS , column mode, document map and many more. The auto completion feature is quite useful. This one is compatible, flexible and up to dated.
Download Now

This GitHUb creation is a free IDE. It is modern still hack able text editor. This one is easily customizable and flexible to make it productive. It works on windows, OS X and Linux. It’s perfect for UI and UX as well. It has ability of auto completion, multiple pans and file system browsers are some of its features. These have made its way to apex in just few year of introduction.
More Detail

This is equally well flexible best fitted for beginners like Eclipsesupports PHP, python, Java, C and many more. It includes larger number of plug-in and extension. It has debugging tools, Git supports including charting, modeling, reporting, testing as so on. Furthurmore, also has YouTube videos and is well updates. In addition,it is also the open source IDE.

Bracket IDE is the modern text editor having great visuals and preprocessor supports. It’s designed in such a way that it grounds up for the web designer. It is light weighted and in fact one of the powerful IDE where you can blend visual tools and executes them when you need them. This provides cross platform for Mac, windows and Linux.
More Details

This is a free open source IDE. It has dragged and drop interference, dynamic libraries and is compatible with many browsers which in fact also supports the larger number of compilers. it also supports many language. It has millions of download and largest community. Also, Net Beans is best for PHP has getter setter generation, code templates along with hints, quick fixes and refactoring.
Download

This is the multipurpose, multifunctional portable IDE which is all free which functions over PHP, HTML, CSS and JavaScript. But also it initially focuses over PHP. This simplifies the development process and memories the codes and syntax fixing them for you automatically. It even detects the validity of your code by locating the current server settings.
Detail

Conclusion
For a web designer, proper coding is always a challenge. When you are dealing with this toughest part, integrated development environment works as a helper hand. You could easily link up the codes from different sources; edit the mistakes and Integrated and overall work. But while looking for one you will come across many such web development IDEs over the internet, you must apply a precaution. You should choose one with greatest number of features and easy handling.