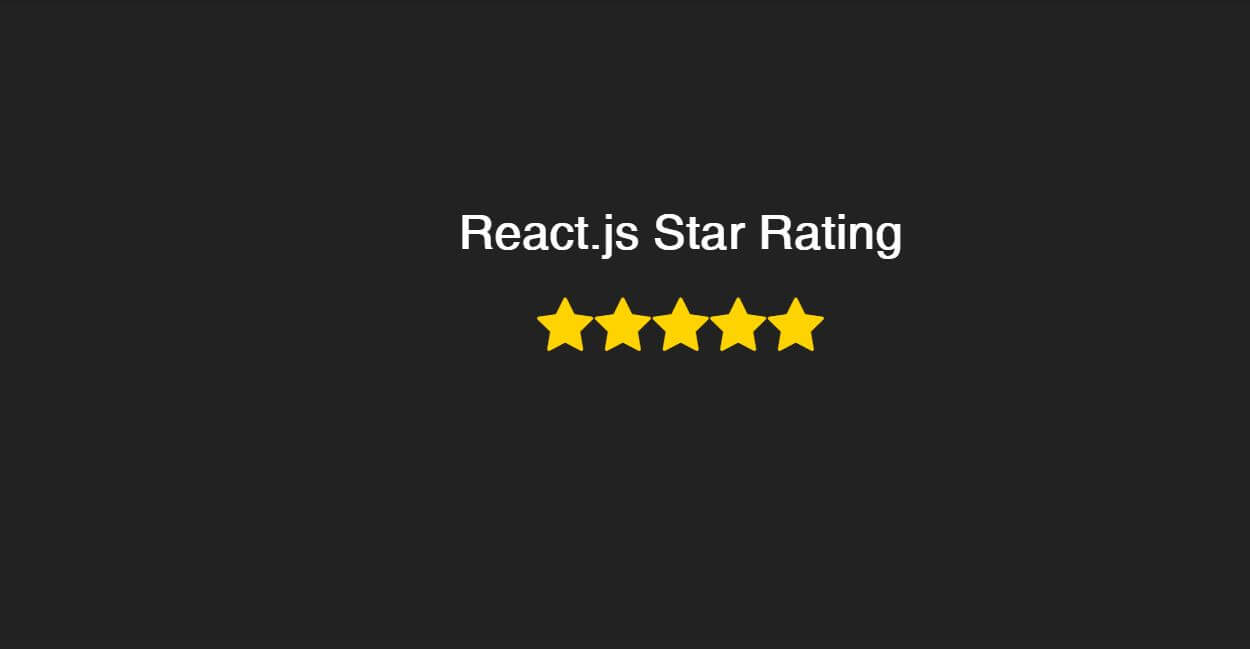 Rating star probably you have seen but using it with the react components library is awesome. Whether you’re a developer or an IT team leader, you want to maintain up-to-date with the recent key technology trends and news. No wonder every top developer’s main feature is the capacity to constantly learn and adjust to the ever-changing setting. A customizable part of the star score to select x stars or to view x stars is the react rating example. Continuous assessment is very essential to make a system more reliable and robust. Hence, the react rating component with a javascript five-star rating becomes the top most used technique nowadays.

User feedback is more important to improve the skill of every component and create new ones. As a feedback technique, we had previously only thumbs up / thumbs down, but with a recent technique, we had a rating system to give feedback with nonother then react javascript rating. Ratings give insight into the views and experiences of others with a product. Users can also rate their goods

We’ve here top 12 awesome star rating components or React Rating Example for react app let’s have look and try to make it with your own dreamy websites.

Star rating how many of you’ve seen and have a curiosity to build your own. Out of 100, I guess 90 of you want because of it’s outstanding views and user feedback capacity. Make a star rating of your own and get feedback from your customer. Ratings like 3 stars 4 stars and most powerful 5-star rating you’ll get if you have a beautiful website. Take a look, try to make it and feels awesome.

Material-UI rating is incredible because it is simple and lightweight. But there is no functionality to refine abilities according to the average customer reviews, which is a much-needed function because some consumers may only want to attempt abilities that have at least a minimum score so they can immediately understand which abilities perform well compared to others. Also, you can use the size property to make it different in sizes.

Thus, to select abilities that have scores higher than or equal to the chosen rating input, we introduce several star buttons on the sidebar because it wants to support open source. Have a look as soon as possible and put the material UI rating on your pages.

Another procedure we are moving towards the react rater which is different in looks than you’ve tried before. It is easy to customize has a callback function and also makes interactive and static as well. In this react component you can put hover effects and amazing emoji also. Isn’t it awesome? well, I guess yes. Grab it on your projects and make more incredible webpages also get feedback with star or emoji.

This reacts star rating component you can do with the value prop, the rating can show any float amount. Use the prop accuracy to identify the minimum permitted change in increment value. There are a lot of react rating examples you get chances to choose from this alternative and make on your own. See the demo or GitHub below and try it once and make different rating styles such as editable, non-editable and so on.

The react star rating is most common then why not you try something different. If you want some changes and keen on making a new one then obviously you are here in the right place. Here pictures describe more than words you can see as well. Pretty cool huh? yes, I say so. In this demo, you can rate different sizes with different looks and styles that have chances to changes the color property as well.

As you have seen a rating with the star but your interest was to build different in different looks then your search has comes to the end. It’s amazing that you must have a look at this example of reacting to make your projects outstanding in looks. In this, you can make not only 5 stars but also you can make a variant rating with variant symbols and numbers.

You can put color effects and either your rating from first or from the last. Also, you put mixed symbols as well. You can update your label and make alert when your rate is changes

7. Star rating component for your React

Might you think all-star rating are the same but I, am sure you will feel different after using it. The star rating components for your react is amazing because you will preset your value here and yes it is customizable too. Like other, in this rating component, you can custom character custom the colors and make the half stars off as well. Looks exactly the same but works different, you can make editable and non-editable options and make 10 stars button which is slightly changing the color when you hover it.

Rating for a reaction. React Rating is an element of reacting rating that promotes custom symbols with both inline styles and glyphics found in common CSS toolkits such as Fontawesome or Bootstrap also JavaScript Rating. By clicking again, you can clear a score also. Ratings give insight into the views and experiences of others with a product. Users can also rate their bought products It “sticks” once a choice is produced. let’s have a look at demo/GitHub and make your doubt clear.

We’re going to use a set of radio buttons to take user input for star ratings as they are accessible to the keyboard. For desktop, if the user hovers their mouse over them, it’s good to modify the style of the past stars. We want the form to be submitted without a Submit button as quickly as the customer makes a selection. To do this, we will set the inputs on the attribute to submit the change form. Which radio button has the checked attribute set determines the original rating. It’s optional.

If all your issues are not covered by the explanations on the above section feel free to learn from this portion as well. We are ready to help you just you need to take action to learn this star rating once and I am sure you will love it. As same as the above explanation it also sticky when you move your mouses over it. This rating component can be changed with the set value.

React.js star rating is an awesome react JavaScript Rating component for interactive star ratings generation and display. IOS and Android are compatible which means it is compatible with both android and ios devices. It is very common with all types of apps that include service rating or experience. You can configure the number of products displayed in advance. In this demo as well you will be more clear just try it once and make it as soon as possible get your reviews and rating form your clients.

JavaScript Rating example with a react star widget is primarily used for making rating components. Simple, animated and fully available star rating system constructed on top of pure CSS, HTML Javascripts and amazing react components. This type of React Rating Example build by Deepak Kamat concepts using font awesome icons are so amazing. For the growing of rating star-like five-star rating using of his concepts, your dream will get successed so have a look of this demo and ready to make like this if any doubt we have code for you as well.

In conclusion, these types of React Rating Example are widely used generally for products that consumer touch to review and start rating. User feedback is more important to improve the skill of every component hence react JavaScript Rating is come up with intelligent factors of every programmer’s eyes. This one is super catchy because it develops the skill ability of the programmer. When the user doesn’t like products they rated only 2 or 3 stars which is not good at all hence, the programmer will pay hard on their work after all they got 5 stars on the back.